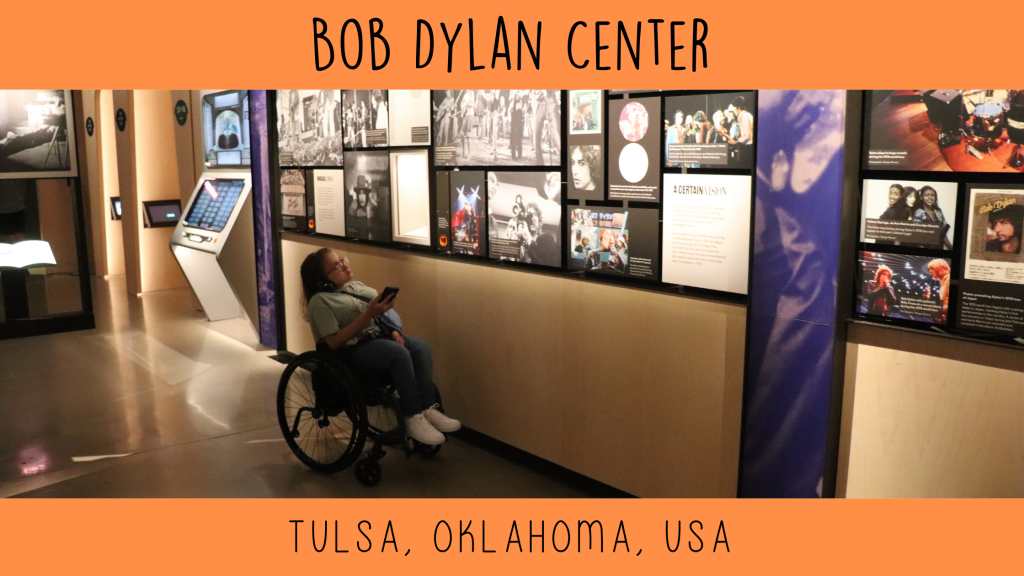 The Bob Dylan Center just opened last year in Tulsa, so we had to make a return trip to check it out. It was worth the extra travel time. I’ve probably mentioned my inability to just quickly to glance over a museum before, and this was no exception. So much information is presented in an engaging way. I could have spent all day here. At the Bob Dylan Center, you get a chance to step into Dylan’s creative process and understand more of what has influenced seven decades of his music.

It is easy to find the Bob Dylan Center in the Tulsa Arts District. It is right next to the Woody Guthrie museum and has a huge mural across the front side of the building. Metered street parking is available with placard spots or several parking lots within a block. The museum was easy for all to enter, including those using wheelchairs. There was an elevator easy to spot just inside the front door to get you up to the main museum level. But before you start exploring, make sure to check out the metal sculpture in the lobby. It was made by Dylan himself special for the lobby of the center.

With over 600 songs written and 125 million records sold, there is plenty packed into this collection. Sheets of music, handwritten lyrics, instruments, quotes, books, art, and objects. I loved learning that, like myself, Dylan is rarely without a notebook and loves to write down his thoughts and ideas as they come to him. There is so much to take in that you will be glad there are self-guided audio tours available. I was lucky enough to have Steven Jenkins, the museum director, showing me around before they opened. As soon as we started the tour though, I knew I would need to return later in the day to explore even more on my own. The center doesn’t focus heavily on Dylan’s personal life; highlighting instead his music. The exhibits are so well designed and with all the visitors listening to the tour on their headphones, even with others around listening to many different things at once, the experience is not overwhelming.

When you first enter, you find a large open space with screens all around displaying films and photos of Dylan’s life. Look over your head. There are lyric sheets that float through the air as if suspended by nothing all coming out of the piano in the center of the room, depicting how Dylan’s song poured out of the piano. The main exhibit area is broken down into eras of music and popular songs, with a giant timeline of his work stretching around the perimeter.

You’ll also find a jukebox full of Dylan’s songs, recorded by dozens of artists.
The jukebox collection was curated by Elvis Costello.

I loved spending time in a small room that resembled a recording studio. It is mostly constructed from wood and features a projected life-size silhouette of Dylan. Try your hand at some controls that change volume, and tone, plus adding or removing tracks of instruments or vocals. Other buttons share stories from Dylan and tales of his recording shenanigans. I also really enjoyed the final room we explored, a tiny space with books to read and a typewriter to create your own message to the world.

They offer discounted combination tickets with the Woody Guthrie museum, and when in Tulsa again, I can see wanting to return to each.