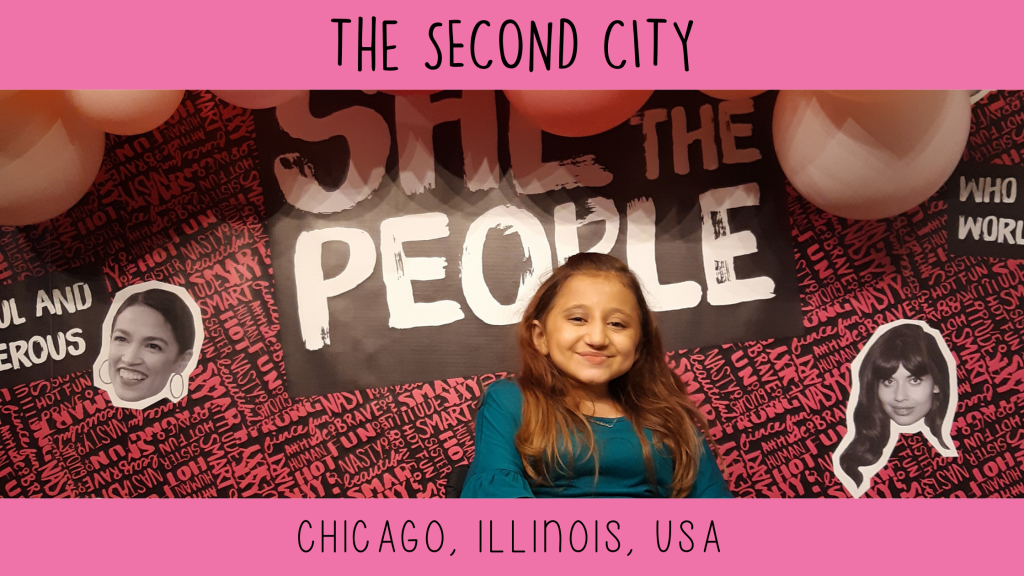 When you’re in Chicago looking for a fun night out, there’s no place more iconic than The Second City! For my birthday this year, I got tickets to see one of their hilarious shows for one of our last nights in Chicago. We saw She The People, which received rave reviews as it traveled all around with extended runs in places like Washington DC and Toronto. The show features sketch comedy, songs, and did not disappoint!

The Second City has made this space super accessible, making this an activity you can enjoy no matter who you are traveling with. Teens are welcome but know that the minimum age for all of their shows is 13 and they provide a rating so you have an idea of what to expect with language and content.

We had no trouble taking a Lyft to the club from our hotel, and when we arrived it was easy to roll right into the lobby. You’ll notice signs directing you to the various theaters, with stairs straight ahead to the second floor. Directly to the right of the stairs is the elevator. This is a nice elevator, not some loading dock freight elevator. I like that the elevator wasn’t down some random hallway or back behind some door, so if you were visiting with friends you didn’t need to feel like they had to go out of their way to accommodate you. Since our show was in the Up Comedy Club, we headed UP to the second floor to find our show.

Right now (August 2021) they’re requiring all guests to provide proof of COVID-19 vaccination. Since I’m higher-risk for complications, I really like that they’re going above and beyond to keep their guests and comedians safe. You can show your actual vaccination card or a photo on your phone.

Once we entered the theater, the Second City staff showed us to our seats. They had spots ready for wheelchairs but also offered to bring me a chair so I could transfer. I usually prefer to transfer to a regular seat during performances and they stowed my chair by the entrance. Despite being a great and accessible space, it still maintains a comedy club vibe, and during the show, it’s dark as waitstaff walk around with food and drink orders. So I don’t mind that they needed to keep my chair out of the aisle so it wasn’t a tripping hazard, just like we experience at most theaters.

The wheelchair spots are at the back of a section, but we were only behind two rows of people. Right now they’re leaving the first rows of the audience open to provide some extra space between the comedians and the audience, but I don’t anticipate having a hard time seeing if those seats were filled, too. I did choose to pull the cushion off of my chair and use it to boost me up just a bit, since I’m petite, but being on the aisle always provides a bit of flexibility with my view.

I was just a LITTLE bit excited when I realized they offered food, even though I had pizza for dinner there’s just something about ordering food while watching a show that is super exciting. The menu had lots of options and the food came out hot.

All of the desserts are from a cool, local company and come in a sealed container. This was great because we ended up not finishing it and were able to take it back to our hotel room. We ordered the curly fries and the s’mores bites. The fries came out hot and fresh, and the portion was large enough for the two of us to share. The s’mores bites were chocolate-covered graham crackers topped with mini marshmallows and were a fun little sweet treat. However, if you’re looking for a rich, decadent dessert, I would check out the other options. These bites felt a little more like a snack mix than a fancy dessert.

Really, I can’t say enough about the show. It ran for 2 hours with a 15-minute intermission in the middle and I was laughing the ENTIRE time! There were so many funny moments including sketches, and some of my favorites joked about how women are depicted in advertising, what it’s like to be an ally, and what it’s like to be a woman in America.

On their website, Second City describes the show as a “high-octane show (that) satirizes the complexities of identifying as female in this wild world while roasting the patriarchy…” and I have to agree. From the opening sketch up until the final moments, I enjoyed every minute.

I absolutely hope I get the chance to go back to the Second City when I’m in Chicago next. The space was easy to access and I liked that I didn’t need to get any special assistance while we were there. The restrooms were also easily accessible, although like most public bathrooms it was hard to access the soap dispenser from a lower-height wheelchair.

When it was time to leave, they had an area designated for Uber and Lyft pickups, so we waited for our ride and rode back to the hotel. On the way, the timing was perfect to catch a glimpse of the fireworks at the Navy Pier (which happen each Wednesday and Friday night during the summer), which made for a perfect end to the evening!

I really hope you’ll visit the Second City, and when you do, don’t forget: