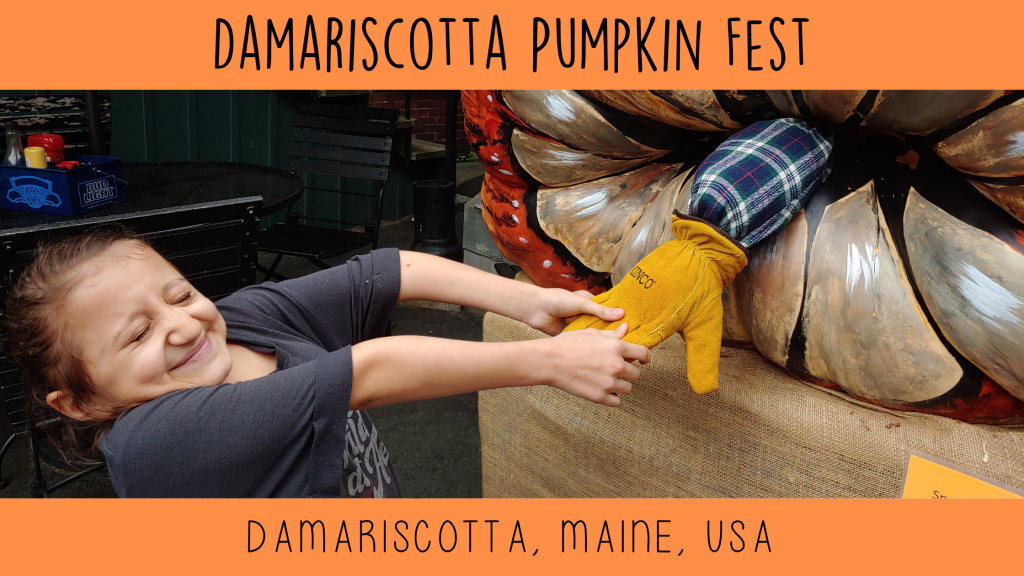 Everyone knows that Maine is beautiful in the fall. This part of the country attracts visitors from all over who come to check out the spectacular changing leaves and beautiful fall colors. Well, this week we got to experience another fall spectacle, the Damariscotta Pumpkin Fest!

What to see at the fest:

Each year the Damariscotta Pumpkin Fest features dozens of impressive and giant pumpkins that have been carved, painted, sculpted, and more by local artists from around the region. We enjoyed strolling the streets and checking out the impressive pumpkin displays. We all had our favorites, but it was so hard to choose! Some of the pumpkins had impressive additions, while others were carved with exacting detail. Some were hollowed out and had designs hidden inside, while others were left whole and skillfully decorated with paint.

This year there were 65 entries found around the city. Each pumpkin is displayed on a burlap-wrapped stack of pallets so they’re easy to spot even from a distance. They each have a sign displaying the name of the design, the artist, the grower, and the size of the pumpkin!

We would LOVE to come back to the Damariscotta Pumpkin Fest another year because in 2021 they had to do a scaled-back version because of COVID-19 and wanting to limit the crowds. Even with the scaled-back version, they had over 10,000 people come to check out the displays. In non-covid years they also feature pumpkin dessert contests, pie-eating contests, a parade featuring the largest pumpkin from the state, a pumpkin catapult, and the “dropping of the squash” where a crane drops a GIANT pumpkin into a pool full of beach balls. Whoa! Most importantly, they also host a regatta.

“What’s a pumpkin regatta?” you might ask. This is where teams of volunteers and engineers carve 400-700lb pumpkins and turn them into single-person boats! This is one of the most popular events of the Fest, so it is even live-streamed to the local theater so more people can watch! This part of the Fest started in 2007, with just 2 boats racing around the harbor.

Getting There and Around:

There were plenty of curb cuts and the sidewalks were generally smooth as we explored. Mainers tend to be very gracious and courteous, so if we hit a narrow part of the sidewalk folks were happy to step aside so I could roll past. There was a good bit of street traffic, so next time we might visit during the opening weekend when the roads in town are closed, which we avoided this year to limit crowds. But we didn’t run into any trouble crossing the streets as we needed. The main road in town does go up a gradual hill, and with the coating of fall leaves the sidewalks can be a little slick on the way back down.

We easily found street parking, but the festival map marked public parking areas as well as restrooms, including accessible ones. We walked through the downtown area to see the majority of the pumpkins and drove to see some of the ones located on the outskirts of town.

One goal of the Damariscotta Pumpkin Fest is to educate folks on the process of growing giant pumpkins. So, each spring 3rd graders from the local elementary school start 600 Atlantic Giant Pumpkin seedlings which are distributed to hundreds of local families on “Seedling Sunday”. Participants are given tips on growing their pumpkins and return at the beginning of October for the official “weigh-off weekend” to see how they did!

The town of Damariscotta is very quaint, and for non-wheelchair-using folks, I think it would be a really fun town to explore. Sadly, most of the shops we passed were not accessible so we were limited to the outdoor viewing of the pumpkins. This was still worth the trip though, as I’ve never seen anything quite like this! These pumpkins were HUGE and there were so many. I’m so impressed by the creativity the artists show when building their pumpkin creations. Looking for more info about the Pumpkin Fest, you can check out their website.