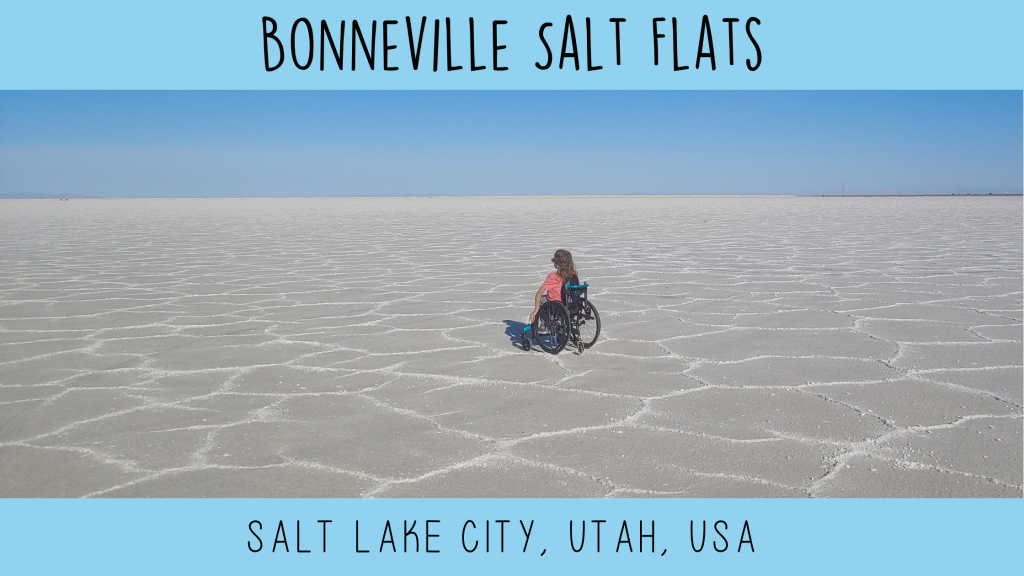 I was just in Utah with my friends filming some commercials for season one of Operation Awesome, so I had to do some sightseeing! I had seen photos online of the Bonneville Salt Flats and knew the 90-minute drive from Salt Lake City was going to be worth it! The salt flats were one of the coolest things I’ve seen, and it felt like we had been transported to another world!

The drive to the Bonneville Salt Flats is pretty easy, heading west out of Salt Lake City. The drive does take a while, but it’s well worth it for the impressive views and photo ops. The landscape is so flat, you can actually see the curvature of the earth! Whoa!

It’s a little tricky to put into your GPS, because while there are lots of locations for the “salt flats” online, you’re really just aiming for a rest stop off of I-80 in Wendover, UT. But don’t worry, it’s hard to miss! Need some extra help, try searching for “West Bound Salt Flats Rest Stop”.

My friends Liam and Ruby came along with me, and we easily filled the drive with lots of music and jokes.

Checking out the Salt Flats:

When we arrived at the salt flats, we were so excited to start exploring. At first, we parked at the rest area and explored on foot, which was easy enough to do with a gradually sloping hill down from the parking area. What I really suggestion though, is to skip that step and drive right out onto the flats. You’re allowed to drive on the flats most of the year, but driving when there is rain or water present is a bad idea, since the salt is only 1″ thick in some places and you can easily get stuck in the mud beneath.

The rest area is set up with some very basic services. A bathroom, vending machines, covered picnic area, and a foot wash to get the salt off of your shoes before getting back into your car.

Driving on the salt flats is a unique experience itself, as the pattern of cracks in the salt makes a crazy sound as your tires drive over them. But you’ll want to take the time to get out and explore, take some photos, and take in the incredible views. The landscape feels endless!

If you’re in Salt Lake City and have a free afternoon, you’ll want to make sure visiting the salt flats is on your list! I loved that I was able to discover this place right alongside my friends, with my wheelchair not limiting my experience in any way.

Make sure you gas up the car before you head off, but know that a few more miles down the road you can refill in Wendover, and get exploring!

Some things to know before heading to the salt flats.