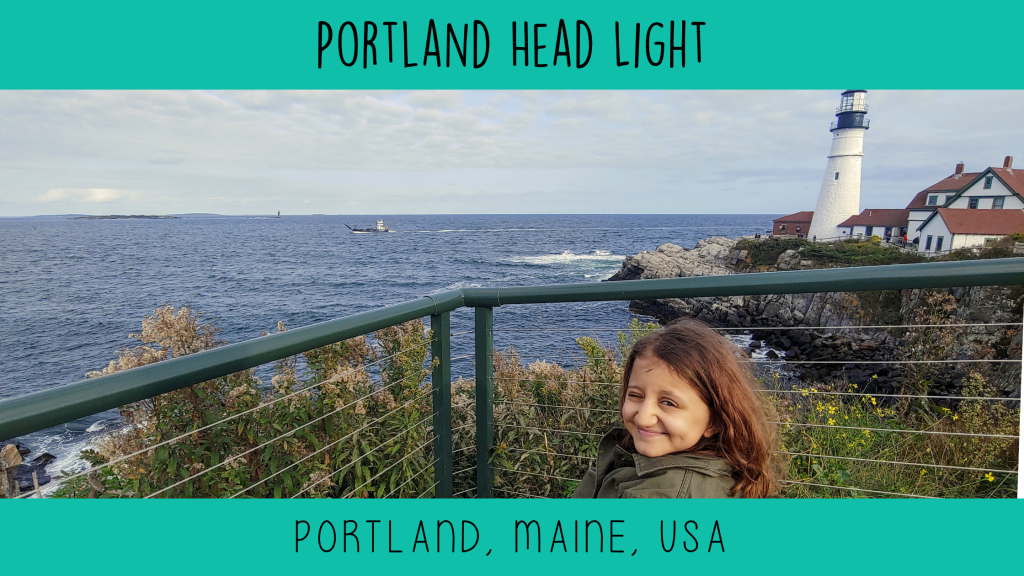 Headlights belong on a car, right? I was so confused when I kept seeing the Portland Head Light on lists of things to do in Maine. Then I found out that this historic lighthouse is perched on Portland Head and the word Light is just short for lighthouse. Once the name made sense and we found out the museum was getting ready to close for the season, we quickly made plans to visit.

This lighthouse is part of Fort Williams park now. The light and fog signals are maintained by the coast guard, but the rest is operated by the town of Cape Elizabeth. The park is 90 acres with trails and picnic areas. The house portion, or keeper’s quarters, of the lighthouse is now a museum.  The small museum has won awards for telling the history of lighthouses and the military happenings of Portland. Inside you’ll find a number of lighthouse lenses and interpretative displays.

The museum operates seasonally, so make sure to check that they’re open when you plan to visit.

Based on the number of people taking photos outside, it’s easy to believe that this is one of the most photographed destinations around Portland. While it was a chilly, windy day when we visited, we popped on my freewheel and explored a little bit of the trails around the lighthouse searching for the perfect photo opportunities. It’s a beautiful and accessible place to get some great views of iconic rocky Maine beaches.

While the museum space is very small, taking up only three small rooms, we spent nearly two hours going around because I like to read EVERYTHING. I especially enjoyed the timeline that ran through the entire exhibit. It helped put things into perspective. One of the rooms really focuses on the military history of Fort Williams, and since I love military history this was especially interesting to me.

As expected, there was a lot of information about the history of this lighthouse but also lighthouses in general. I was surprised by how interesting this turned out to be, as the exhibit detailed the history of shipwrecks in the area, laws and regulations around lighthouses, and the science behind them!

The museum was fully accessible and I had no problem rolling around and checking out the exhibits. Rolling around outside, the walkways to the museum and primary lighthouse viewing area are all paved so we had no trouble. For the other paths, which were hard-packed dirt, we used my Freewheel attachment. There were some inclines that I needed help with, but there was still plenty to see at this site even if you don’t have a traveling buddy to help.

The Portland Head Light is a great place to get some beautiful photos of your Maine adventures. The museum was small but educational, and this was a fun way to spend a few hours one afternoon.