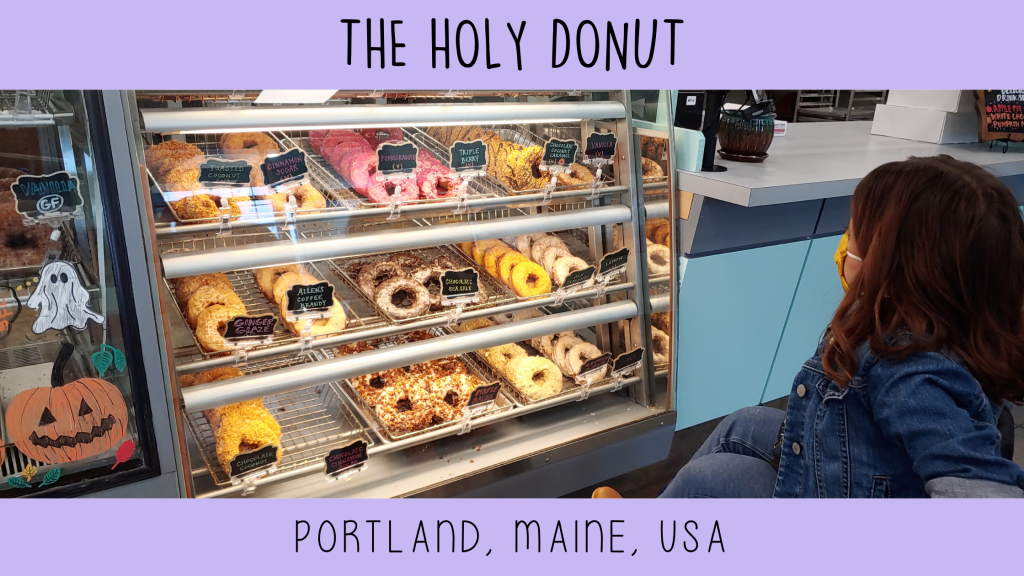 When we told people our first stop in our year-long adventure was Portland, Maine, person after person kept telling us that we HAD to visit the Holy Donut! We were excited to try it, because who doesn’t love donuts? However, there was something different about these donuts. Instead of using tons of sugar, Leigh Kellis, the founder, wanted to make the sweet treat a little healthier. So in addition to other quality ingredients, the donut dough actually has… potatoes! You heard right! When I first saw this, I admit, I was a little skeptical. But once I tried these delectable treats, all my doubts went away!

Getting there and accessibility:

Before we get to the good stuff, let’s talk about the frustrating part. The three locations in Portland were fairly easy to get to. The first location we tried was near Park Avenue. Unfortunately, when we looked for an accessible way to get in, there was none. No ramp, no side door, nothing!

So next we decided to try the location on Commercial St near the Portland Harbor. Again, no way for me to get in. When my mom went in to ask if we were somehow missing a back or side entrance (you’d be surprised by how many back alleys I have to go through to get places), they did at least offer to bring donuts out to us, but I knew it wouldn’t feel the same.

We started feeling a little discouraged, but we wouldn’t give up the search. The third location in Scarborough is only open as a drive-thru, and we wanted the full donut experience. Maybe we’re weird, but we like to see the donuts and pick based on the flavor and the look! Fueled by our growing hunger—and our frustration by the lack of access— we set our sights on the Auburn location.

We called ahead and were told by a really nice staff member that they thought they were accessible, but that they wanted to double-check before telling us for sure. After waiting a moment, he confirmed that it did seem they were wheelchair-friendly. He was only worried about the door but said he would come open it for us if we got stuck. When we arrived at the Auburn location, it was a dream. This location has handicapped parking, a large parking lot, and a nice, smooth ramp that led right into the building. The door, by the way, was no problem, but I appreciate him offering to help. Their restroom is also very accessbile, in fact I changed into my new Holy Donut t-shirt there!

As expected, there were plenty of spaces to sit in the eatery. The tables and chairs were not closely packed together, as I’ve encountered in some places, so it was easy for me to transfer into a seat by a window. This meant I got to enjoy the peaceful, suburban, Maine landscape while they finished boxing up all the donuts we ordered.

The most important part of this adventure! My family agreed to get a variety of donuts for a special taste-testing. We got a dozen donuts, carefully packaged in a box. You order everything at the counter, and I loved seeing the variety of donuts displayed in the case!

Here’s what we got:

I loved the dark chocolate sea salt, as it had a nice balance of sweetness and saltiness. We couldn’t find much if any coffee in the Allen’s Coffee Brandy, so that donut didn’t exactly hit the “wow” factor. While the Maple Bacon was good, it wasn’t my favorite donut, as I’m not really a fan of maple. But the rest of the family felt it was the best maple donut they had ever tried, balanced without being too sweet. The Fresh Lemon certainly lived up to its name. You could definitely pick up the tart, tangy flavor!

I was pretty excited to try the Holy Cannoli Ginger, and the ricotta filling was perfect. It was creamy and smooth and married well with the ginger. Like the Fresh Lemon, Triple Berry also held a lot of promising flavors. A blast of fruitiness that will be sure to hit your taste buds in a delightful way. The Chocolate Coconut Caramel served flavors that paired great together! I’m a big fan of caramel, chocolate, and coconut, so this was of course perfect!

There was one treat that really hit the “wow” factor for us, and that was the Cheddar Bacon donut. As soon as we bit into this treat, we were in awe of the savory bacon and cheese. Combined with the sweet, soft dough, this donut was perfect. We all agree that this is the top #1 food of the Holy Donut, however, the other treats aren’t far behind! Eventually, I was getting full from all the donut sampling, so I couldn’t imagine eating more! Luckily, we were able to take the leftovers back to our Airbnb and enjoy them later.

As far as the food goes, this is definitely one of the best donut shops we’ve gone to. But, it’s really discouraging to have gone through so much to find an accessible location. Ramps are something that huge portions of the population can benefit from (not just the 2.7 million wheelchair users in the U.S. alone) so it’s frustrating to see so many places haven’t considered access. If you flew into Portland and were relying on rolling, public transportation, or ride sharing around, this isn’t someplace you’d be able to visit.

However, at the Auburn location, the Holy Donut’s friendly customer service and heavenly donuts almost make up for it! This is certainly a place you don’t want to miss and we would pop in again for these delicious donuts—especially the warm bacon cheddar!