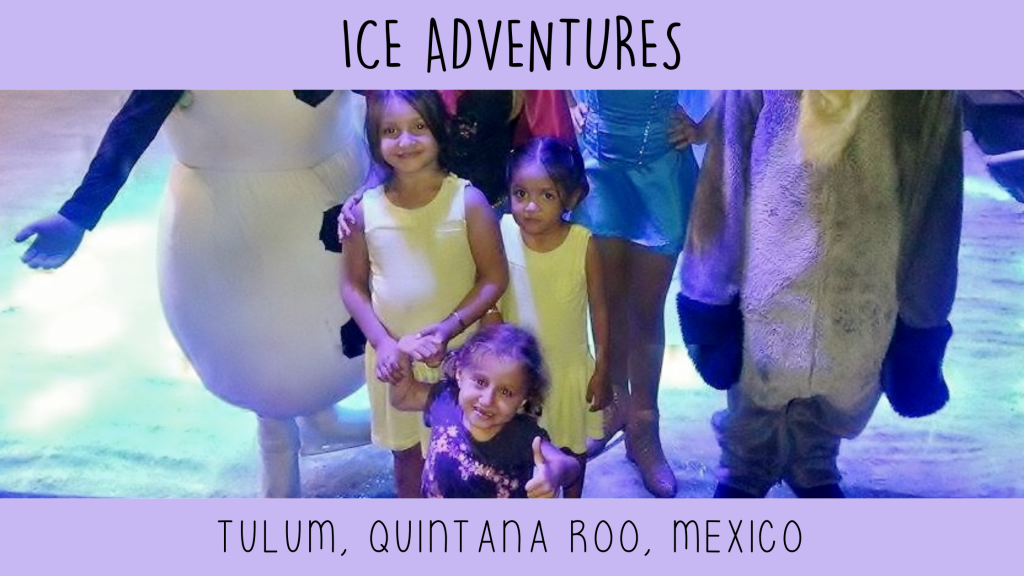 There are certain things we expected to find when we got to Mexico. Amazing food, great beaches, and a healthy dose of Mayan culture. While we have had fun exploring all of those aspects of Mexico, last Friday we got an unexpected surprise and a visit with some familiar characters. After school, Anna’s best amiga in Mexico invited Anna to head to Playa del Carmen for the evening. Her mom knew about something “cool” going on, so we crossed our fingers that tickets would still be available and loaded up in their car.

Anna has never had the luxury of seeing Disney On Ice, partially because in the United States we always live too far from where they are performing and partially because of the price. Here in Mexico though, there is a touring ice performance group that offers tickets for as little as 100 pesos. That’s less than ten bucks! We were in!

After having dinner with Carlota and her family, we headed back to enjoy the show. We had our pick of some really great seats and once the show started we were able to move the girls even closer. The set-up was similar to that of a small traveling circus. Only with a temporary skating rink set up in the middle. We’re not sure how they managed to keep it frozen because it was HOT inside the tent. On closer inspection, it appears that the rink is assembled by adding water over the top of ice cubes and several giant air conditioning units running at full blast. If you’ve ever ice skated on a pond, in the Mexican heat, then you understand the talent these skaters had to stay on their feet.

The show started with two girls belly dancing on skates.

Cross that off of our “must see” list. They were later joined by Aladdin and two palace guards, next the Genie and finally Jasmine. As the couple skated around the rink, a hoop lowered down and at times Jasmine twirled around 20 feet up in the air. It was actually pretty impressive. The girls were loving it.

Next up was a rendition of Cinderella, complete with a giant carriage on bicycle wheels that had to be carried onto the ice by four stage hands. Cinderella danced with her prince, gave him a kiss on the cheek, and then climbed up into her carriage. Next came the main attraction for our girls… FROZEN!

The skater Anna was by far our favorite. She was so animated and did some really impressive twirls and lifts with Hans. I wish my camera batteries had more life to them so I could have captured more of their numbers. Of course, Elsa was there as well, however, the adults in our group were less than impressed. Anna (our real-life AnnaOTG) was thrilled though. Beyond thrilled! Dancing and singing and cheering along. Kristoff, Sven, and Olaf were all there too. It was pretty sweet and enjoyable.

After Frozen, was an intermission where Carlota, Constanza (her little sister) and Anna got to go meet “THE REAL LIFE ANNA AND ELSA!!!!” I wish Anna hadn’t been so tired when we got back home so I could have captured her excitement on film right away. I’m not sure any way the night could have gone better for her.

Other acts included a short Snow White number, a vegas dance style number, and short mini-sketches from an ice skating clown. All-in-all, probably the best 100 pesos we’ve spent since arriving in Tulum. We took the collectivo, a van-style public transportation system, home. Anna was asleep before the drive even started. Other passengers were so great and helped keep her sleepy self from falling out of the seat as I unloaded her wheelchair for the final walk home. Anna did manage to tell her Gam when we finally arrived “It was AWESOME!” before falling asleep again.