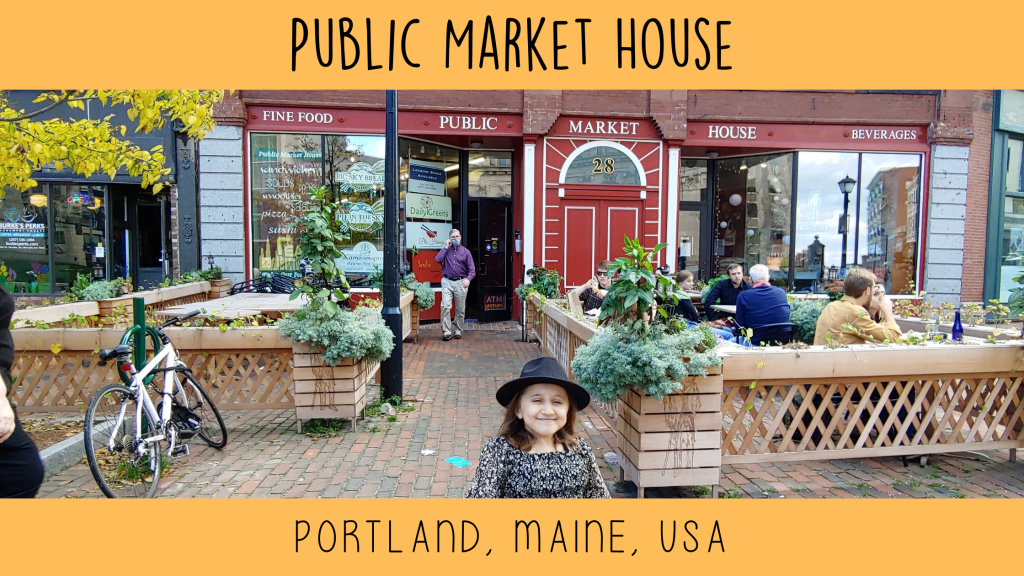 Getting There and Accessibility:

It was easy to find the Public Market House using our GPS, and there were tons of parking lots and garages, as well as street parking nearby. The sidewalks around the area are a mix of cobblestone and brick which aren’t the easiest to navigate but they weren’t terribly tricky.

The entrance to the Public Market House has a power door button and the elevator to the second floor is located just to the right of the front door inside. We actually missed this on our way in and found ourselves disappointed at the staircase in the back. It wasn’t until we turned around to leave that we saw the elevator.

The vendors seem to change frequently, but here is who was there when we visited in October 2021. Each seems to have its own hours that they are open, so I would check their websites before you plan your day.

We visited three of the food stalls. First up was Yardie Ting, which featured authentic Jamaican dishes with a modern twist. They offered lots of main course options with jerk spices, but I was in the mood to try their mac & cheese. We also got a meat pattie, which had a flakey crust and a well-spiced meat filling. They have a rotating daily menu but always have the patties. I would definitely get one of the patties again and will watch for them on other Jamaican menus! This combo was about $7.

From KamaSouptra, my Gam ordered the Clam Chowder. It wasn’t her favorite out of the amazing chowders we’ve had in Maine. She can’t figure out exactly why it’s different, but she suspects it is riced cauliflower in the mix. It wasn’t as creamy as some others we’ve tried, so it might be a great option for someone looking for healthier clam chowder. The clam flavor wasn’t very pronounced either. It had a general “healthier” but less authentic feel to it. The cup of soup came with a whole wheat roll and was around $6.

Finally, my mom got Futomaki from Mr. Tuna. They had a wide mix of sushi options and everyone nearby who ordered from them seemed really happy with their meal. My mom really liked her order, as it had a mix of fish and veggies, including a slightly-sweet pickled “something”. Mr. Tuna is a pricer open, costing $14 for this order, but most of their items are a bit higher.

Since my mom ordered from Mr. Tuna, we were able to grab one of their designated outdoor seating tables. There were tables and chairs set up inside as well, on the second floor, but we wanted to enjoy the weather. There was another outdoor patio that wasn’t set up when we were there, and we couldn’t quite tell if this also belonged to Mr. Tuna or not. Mr. Tuna also had an indoor seating area for those dining with them.

There’s not a ton of seating overall, so most folks that visit take food to-go.

There were signs for several places that are stalls that are supposed to be open, but when we visited at 1:30 on a Friday, they were closed. There were several others that were empty and others still with “coming soon” signs for new businesses. We know the pandemic has been tough, and since they seem to focus on the daily “work in the city” crowd, work from home must have been tough on them. Hopefully, though, they will get through this time and flourish. If we’re in the area again, we would pop in to see who is open and grab something yummy. We really appreciate the elevator despite the age of the building and the fact that so much of Portland uses the age of the building as an excuse to not be accessible. With other nearby restaurants (falafel, donuts/coffee, sandwiches, and a hot dog cart) it might be a good fit for a family trying to please lots of different tastes.

Some things to keep in mind when visiting the Public Market House: