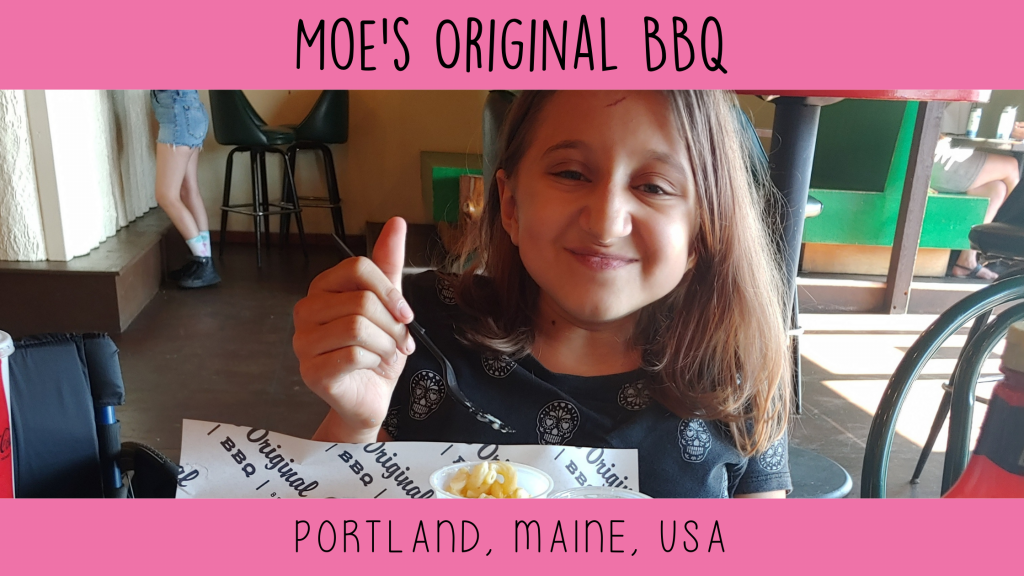 Sometimes you just need some BBQ. While my mom and I were out exploring Portland, we suddenly realized we were starving—and we were craving something smokey. So we tried out Moe’s Original BBQ. Overall, it was a pretty good place to grab a quick meal.

We tried a few things and even ended up ordering more of their side dishes to take home to make a meal out of our leftovers later. For the main course items, we tried the pulled pork, ribs, and smoked turkey. The pork was good, but the smoke flavor wasn’t as pronounced as some places we’ve tried it. The ribs were really good! We only added two on the side to our order to test them out, but we were not disappointed. The meat fell off the bone and I quickly saw why they’re one of the pricier things on the menu. The smoked turkey we got on a sandwich, which typically comes topped with slaw, pickles, and two kinds of sauce. It was really tender and the smoke flavor came through nicely. The sandwich was also a really generous size.

The sauces they have are a “sweet and tangy BBQ” and an Alabama white sauce. If you’ve never tried white sauce before, you should. While it’s not my favorite of the two, I think it’s important to try new things. White sauce is mayonnaise-based, but the added vinegar and spices make it tangy, spicy, and a bit sweet.

When it came to the side dishes, Moe’s Original BBQ did not disappoint. We tried their Mac&Cheese, which was a baked-style mac. I liked this so much that we had to get a second order to-go. Their green beans were yummy with pieces of bacon mixed throughout and a little bit of a peppery kick. Their baked beans were less sweet than what I was expecting. They had a nice balance of spice though and a strong tomato base. My mom had their coleslaw, which had a light dressing and thin slices of fresh jalapeno peppers mixed into the slaw. Since she usually likes a sweeter coleslaw, it wasn’t her favorite, but she said it balanced really well with the bbq.

They have daily side dish specials, and we tried a sweet potato dish that was sweet, warm, and wonderful. We also tried their stuffing, which came served with a bit of cranberry sauce. And finally, a creamy rice and chicken dish, that felt warm and comforting. Just the type of thing you’d want to eat on a cold night.

Both of our meals were served with a big slice of cornbread, which we ended up saving and eating later slathered with lots of butter. Last but not least, the folks at the restaurant gave me a cup of their banana pudding. It was sweet, cool, and creamy, and a great way to end a meal.

The restaurant was fully accessible. Outside there was an easy ramp, while inside all the walkways are nice and wide, so it’s easy to maneuver in a wheelchair. There is a section of outdoor seating that has been set up in the parking area, barricaded with metal fencing. Unfortunately the way it’s set up blocks access for a wheelchair, as you have to step down from the sidewalk into the dining area. If you had someone with you, they may be able to adjust the barricade for you, or if you can go down a curb yourself you would have access to eating outside. Since there was only one other group eating when we were there, we felt ok sitting inside the big, open dining room.

The price of everything seemed fair for the portion sizes and about what you would expect from a quick service BBQ place. Sandwich plates which are served with 2 sides are $10-$11, while platters, also served with 2 sides as well as cornbread, range from $12 for pulled pork to $16 for ribs.

Moe’s Original BBQ had a fun, industrial vibe. It was quiet the day we were there, so it was a nice, calm place to enjoy a fun lunch. They’re located at 209 Western Ave, Unit A, South Portland, ME, and they are open Monday-Saturday 11-8 and are closed on Sunday.

Overall, if we were in the area and needed something quick, we would pop into Moe’s Original BBQ again for the ribs.